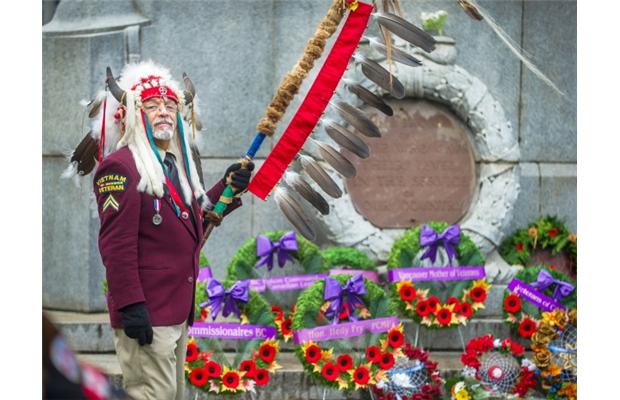 Adapted from The Province and CTV News by Nila Gopaul

On Sunday, November 8,
about 100 people marched through
Vancouver’s Downtown Eastside.
The marchers sang and beat on native drums.

The event was the city’s 10th
annual National Aboriginal Veterans Day March.
The march started at Carnegie Centre
and ended at Victory Square.
At Victory Square,
there was a remembrance ceremony
at the cenotaph.

“Veterans who came back lost their status
and lost all of their rights,” B.C. Grand Chief Stewart Phillip said.
Later, in court, many aboriginal veterans won their rights back.

Veterans, like Old Hands (in the photo above), say
they will also stand with their brothers
on Remembrance Day, on November 11.