On January 15, students and teachers in BC wore black shirts to school.

They wore black shirts to raise awareness about racism.

A petition for Black Shirt Day

Kamika Williams is a member of the Anti-Racism Coalition of Vancouver. She went to school in BC.

Williams helped start a petition to make Black Shirt Day mandatory for all schools across Canada. She wants students to learn more about Black history.

“There’s a lot of Black people in Canada who aren’t represented in the educational system,” she said. “You go to school and none of the teachers and the principals look like you and none of the stories they talk about in history reflect anyone who looks like you. Although you’ve been here for hundreds of years.” 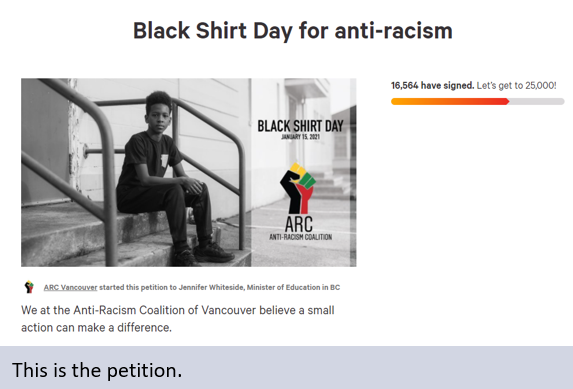 Williams hopes that Black Shirt Day will be official by 2022.