A bobcat was on a railway track near Trail, BC. It was eating a duck.

It was cold out. The bobcat’s back paws stuck to the frozen rail. 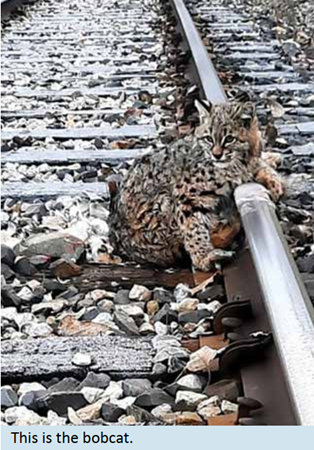 The workers came to help. They tried to cover the bobcat with a coat.

But it hissed and growled. It tried to leap at them.

The workers called their boss.

The boss brought a pail of warm water. They poured the water on the bobcat.

The warm water worked. An hour after they found the bobcat, it was free.

The bobcat stayed on the track.

The bobcat wanted to eat the rest of the duck. The bobcat was lucky. A train was about to come down the tracks.