Canada is holding a general election. The election is on September 20.

What are we voting for?

Voters elect 338 Members of Parliament (MPs). Most MPs belong to a political party.

The party with 170 or more elected MPs forms the government.

The leader of the party becomes the Prime Minister. 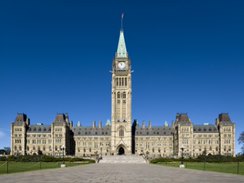 This is Parliament Hill in Ottawa.

Why should I vote?

When you vote, you are taking a stand on issues that are important to Canadians.

You are choosing a person or a political party that shares your views on:

Sometimes a MP wins by only a few votes. Your vote could decide the winner.

Adapted from A Guide to Voting: A literacy practitioner workbook for voting in the Canadian federal election – ABC Life Literacy Canada, abclifeliteracy.ca