Can our pets be affected by music?
Research shows that classical music
can calm cats and dogs.
Music can also calm gorillas and elephants.

Music and people
We know that music
affects humans in different ways.
Yoga teachers play
music with a slow tempo.

Exercise classes play music
which has a fast tempo.
Some music relaxes us.
Other music distracts us.
We say some music is sad.
Or some music sounds happy.

Music heals
Studies show that music
can reduce someone’s pain.
Music is used in some hospitals
to reduce the need for medication.

People with high blood pressure
can listen to relaxing music
morning and evening for 30 minutes.
They can train themselves
to lower their blood pressure.
And they can keep it low.
Classical, Celtic or raga music
may help with this problem.
Listening to music or singing
can also lower stress.

Medicine for the heart
Music is good for your heart.
Researchers say it is the tempo
of the music is important.
It is not the type or style of music.
It does not have to be music you like.
A group of young people listened to
different kinds of music.
Researchers monitored their breathing,
heart rates and blood pressure.

Mozart’s music
A study in 2014 showed that listening to
one Mozart piano piece improved thinking.
This was called the Mozart Effect.
Children who take music lessons
develop a better memory compared with
children who have no musical training.

Calming cats
Most animals do not like going to the vet.
Cats become frightened and nervous.
These cats often scratch and bite.
Cats hearing classical music were more calm.
This music affected cats having surgery.
Their breathing rate slowed down.
Cats needed less anesthetic.
Too much anesthetic is not safe for animals. 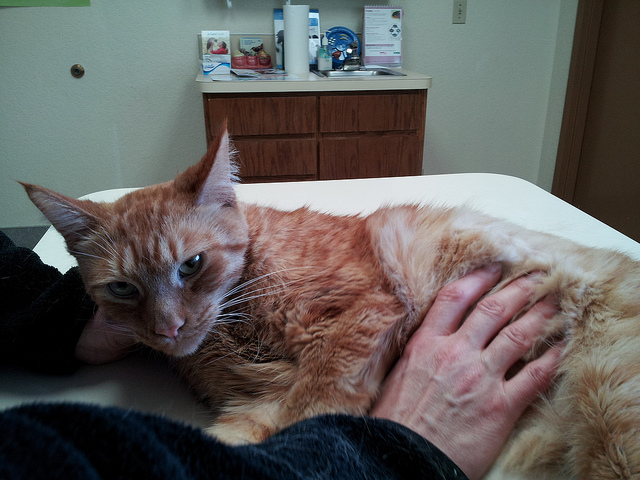 A sick cat in a vet’s office.
Photo by James Perkins/CC, Flickr

What kind of music?
Researchers played Samuel Barber’s
Adagio for Strings for these cats.
This music relaxed the cats.
And they tried rock music.
But rock music seemed to be
more stressful for the cats.

Your dog or cat’s doctor
Should you ask your vet to play music?
Playing music to pets
in a vet clinic is easy to do.
And it is not expensive.
Maybe pet owners should wait for more studies. 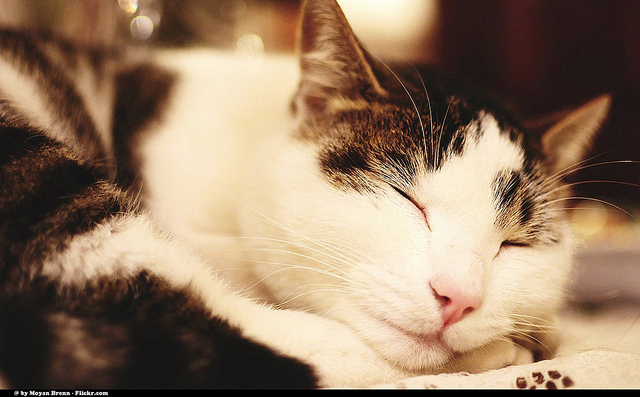 2. Listening to Thunderstruck by AC/DC appeared stressful for the cats.