Injured bird gets a peg leg 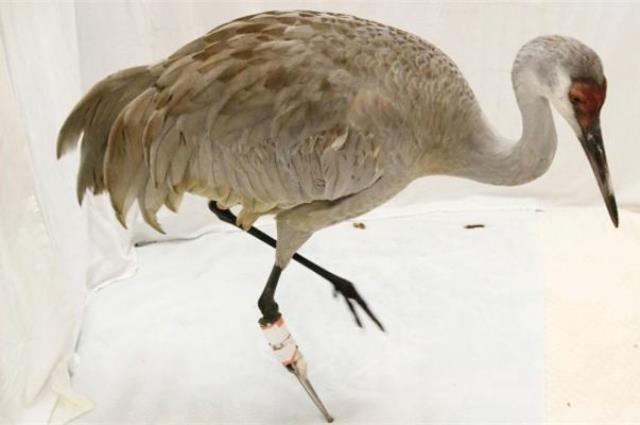 A male sandhill crane has a new leg thanks to a vet at Elizabeth’s Wildlife Center in Abbotsford. The four-foot tall bird was injured on a golf course in Richmond.
Photograph by Kim Stallknecht, The Vancouver Sun

Adapted from The Vancouver Sun by Nancy Carson

Rare birds are living
near a golf course in Richmond.
The birds are called sandhill cranes.
About 12 are in Richmond, Delta
and Pitt Meadows.
Years ago, many cranes lived in those places.
But humans now have homes there.
The cranes are losing their habitat.

About cranes
Sandhill cranes can live up to 20 years.
They are over a metre high.
These birds live near water.
They have long legs and long beaks.
They wade into the water to get their food.

An accident
It is the beginning of March.
People are playing golf.
A crane is walking near the golf course.
Someone hits a ball off the course.
The golf ball smashes the crane’s right leg.
The bird cannot walk.
It cannot get food. It will die without help.

Help for the bird
Someone sees the injured bird.
He calls Myles Lamont.
Lamont works with birds.
He has a long net.
He knows the crane is hungry.
With a towel and some grain,
he gets close to the animal.
Lamont grabs the crane’s neck.

A trip to the vet
Lamont finds a golf club cover.
He knows that birds stay calm in the dark.
Lamont cuts a hole in the cover.
The crane’s beak sticks out.
He takes the bird to Ken Macquisten.
Macquisten is an animal doctor in Abbotsford. 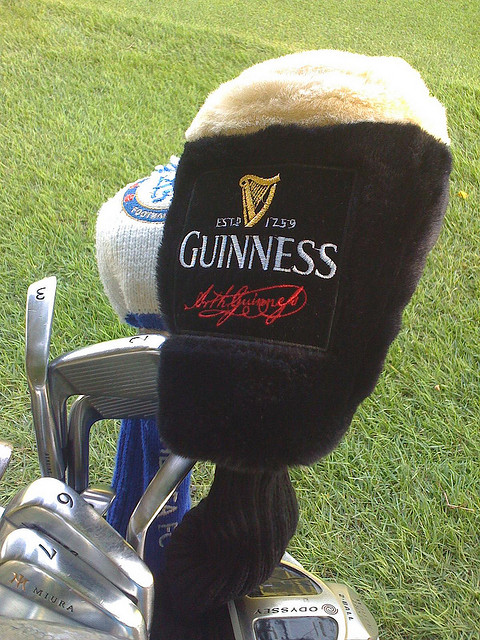 A problem
The vet says he cannot save the bird’s leg.
He removes the bad leg at his animal clinic.
What will he do now?
Macquisten wants to make a new leg.
This new leg is called a prosthesis.

A peg leg
Years ago, people made fake legs out of wood.
They called them “peg legs”.
These legs were very heavy.
Now a prosthesis for a leg
is made out of plastic and lightweight metal. 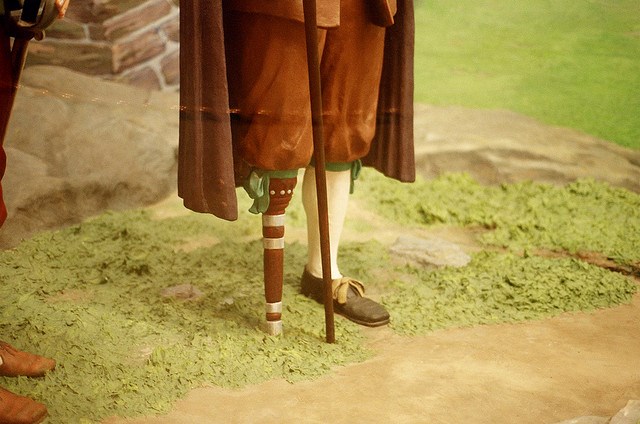 A leg for a crane
Macquisten finds some wire
in his shop at home.
He tries to make a new leg.
First, he uses a piece of wooden dowel.
The bird uses it well.
Then he makes one out of wire.
Macquisten is worried.
He knows the crane walks
in mud and water.
He does not want a leg
that sticks in the mud.

Trying the new leg
Macquisten tapes the wire leg onto the bird.
The crane walks around.
He looks at the people.
Then he fluffs up his grey feathers.
He is calm and happy. 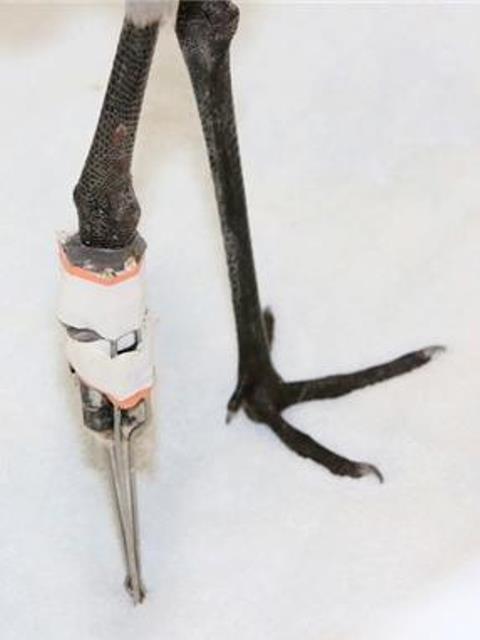 A happy ending
The young crane is doing well.
He is at Elizabeth’s Wildlife Center.
The staff feed him grain, cat food
and blueberries.
Macquisten is working with other people
to make a better leg.
Then his caretakers will return the bird
to his home near the golf course.
Macquisten says the bird can survive there.
But the crane could not survive in the wild.

Injured bird gets a peg leg