Just too much hurt… better late than never 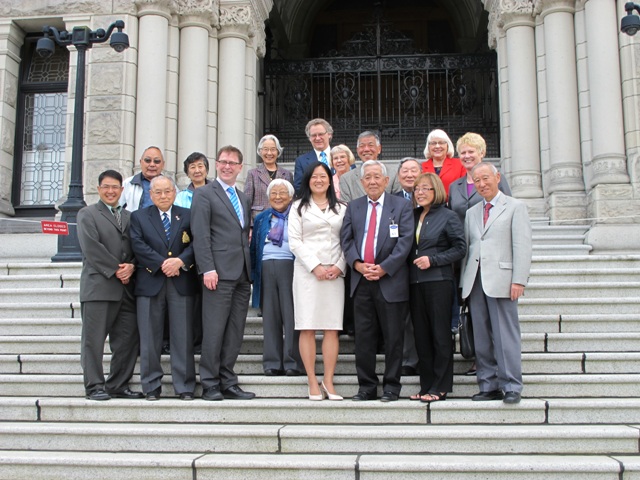 The treatment of Japanese Canadians and people of
Japanese descent during the Second World War is a dark period
of Canadian history.  Many Canadians do not understand
what happened.  Others do not want to talk about it.

Events leading to internment
Japan entered the Second World War in 1941.
There was much racism at that time on the West Coast of B.C.
The B.C. government thought the Japanese Canadians might help
Japan in its plan for war. The government wanted to intern these people.
Members of the Canadian military and the RCMP did not agree.
They said that the Japanese Canadians were no risk at all.
But the B.C. government pushed the federal government.
Finally, almost 22,000 people of Japanese origin went to prison camps.
About 14,000 of these people were born in Canada.

The order to leave
Japanese Canadians living on the West Coast received orders.
They had to leave by April 1, 1942.  If they refused,
they went to a prison camp in Ontario.

Many had only 24 hours to leave.  They could only take
what they could carry.  Women with young children
had only one free hand.

These mothers carried very little.  They left almost everything
in their homes.  Or they gave some away to neighbours.
The government took their property and fishing boats.
Later they sold the property.  The government didn’t ask permission.
Other people bought these things at very cheap prices.
The Japanese owners received nothing.

Where did they go?
Many lived in animal barns at the PNE in Vancouver for three months.
Several families shared one space. There was no privacy.
There was no place to cook.  Families were divided.
Men and teenage boys went to work camps.
They built railroads and picked sugar beets.
Women, children and seniors went to Greenwood, New Denver
and other camps.   The camps had no school.
Life was terrible in those places.  Their lives changed forever.
In 1945, the government said move east of the Rockies or go back to Japan.
Finally, in 1949, the Japanese were allowed to return.

Ottawa and B.C. apologize
Forty years later, in 1988, the Canadian government said sorry
to Japanese Canadians.  In November, 2011, Tosh Suzuki
sent emails to Naomi Yamamoto.
She is the MLA for North Vancouver-Lonsdale.
Suzuki wanted B.C. to say sorry, too.
He was just seven years old when he and his family were interned.

Seventy years later, on May 7, 2012, Yamamoto stood up
in the B.C. legislature.  She said B.C. should say sorry.
Everyone voted yes.  Yamamoto is the first Japanese Canadian
to be elected to the BC government.  She is also the Minister
of Advanced Education.  Yamamoto’s father, Mas, was 14 in 1942.
He also went to a prison camp.  On May 7, Mas Yamamoto
heard his daughter speak about the internment.  He was
in the room to hear the government apology.

U.B.C. students in 1942
There were 76 Japanese Canadian students at UBC in 1942.
U.B.C. ordered all of these young people to leave.  They had
to move from the B.C. coast, too. These students could not
complete their studies.  They could not go to their graduations.

Japanese students in the U.S.
Japanese Americans also had a problem. But many
U.S. universities protested.  These schools tried to transfer
their students to other universities.  Or they helped
the young people complete their degrees.
So, some students studied while in the prison camps.

A four-year journey
Mary Kitagawa is a retired B.C. high school teacher.
In 2008, she wrote to UBC.  She wanted UBC to say sorry, too.
She knew that U.S. universities gave special degrees to their former
Japanese American students.  Kitagawa’s parents taught her
“if you see something wrong happening, we should voice our discontent”.
“Someone had to speak out for these students.”  Kitagawa,
her husband Tosh, and other members of the Japanese Canadian
community worked hard.  They could not find the names
of these students at UBC.  Kitagawa tried everything to find
the students of 1942.  They asked families and friends to help.
They put notices in newspapers.  Finally they had a list of students.

UBC recognizes its involvement
UBC granted honorary degrees to 61 students on May 30, 2012.
These 61 students had to drop out of university in 1942.
Another 15 students had their old degrees given back to them.
They finally could be part of their graduation ceremonies.
Fifty-three of the original 76 students had died.
Family members came to accept their degrees.
Ten of the former students attended the event.  The 22 living students
are ages 89 to 96.  Some of those seniors came from Ontario.
Another came from Japan.  UBC also promised to develop programs.
These new courses will tell future students about this shameful period
in Canadian history.

The graduates
Nori Nishio, a retired dentist living in Nanaimo, received his degree.
“Better late than never,” he commented. Stanley Fugawa, 74, of Burnaby,
said the same.  Nishio’s son Don also attended.
His father told him little about the sad time. But a few months ago,
Don learned more. “I think there was just too much hurt,” he said.
Louise Noguchi came to Vancouver from Toronto on behalf of her father.
Kiichi Noguchi died two months before he could receive his degree.

Another apology?
Isabel Kimoto and her daughter Ellen went to an internment camp.
Isabel was a resident of Tofino. Ellen was three months old.
After the war, Tom Gibson and his Tofino Council passed a law.
The law said no Japanese could buy land in Tofino.
The Kimotos had settled in Tofino in the 1920s. But they were
not welcome in 1949.  Ellen is waiting for an apology
from Tofino’s Council.  “Tofino council never got up and said
they were sorry.  I think that would be the honourable thing to do,” she says.