Toy of the Century 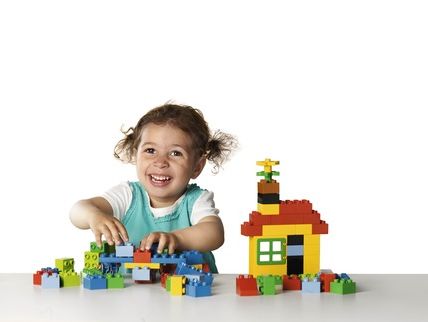 They are small plastic bricks. They are different colours.
And they have studs on them. Some have six studs.
Others have four or eight studs. Millions of kids play with the bricks.
They call these bricks “Lego”.

History of Lego
The Lego company started in 1932 in Denmark.
Ole Christiansen and his son, age 12, made toys.
Ole was a carpenter. He started the business
in their basement. They made wooden cars and trucks.
They also made animals and yo-yos.
They called their company “Lego”.
Lego means “play well” in the Danish language.

About Lego
Did you know? New Lego bricks can interlock
with bricks made in 1958. The Lego family believed
“only the best is good enough”.

Famous toy
People say Lego is the “Toy of the Century”,
the best toy in 100 years.
Now Lego makes big bricks, too.
Little hands can use the big bricks.

Lego and computers
In 2004 the Lego company had a new idea.
Look on a computer. You can make new Lego models.
If you like the model, you can buy the bricks.
Lego will deliver them to your home.

The Lego company has sold over 200 billion bricks in the world.
A Lego store has opened in Vancouver.