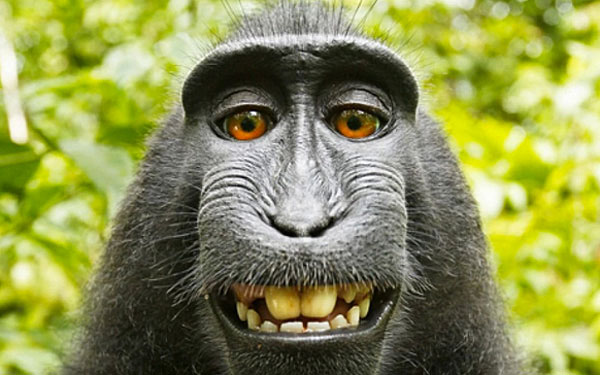 A monkey grabbed a camera from a photographer and took this selfie.
WIKIMEDIA

Everyone knows what a selfie is.
It is a photo you take of yourself.
Teenagers take many selfies.
President Obama and the Pope
took selfies.
Some animals take selfies –
if they can touch a camera. 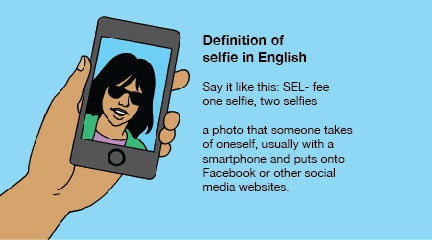 Illustration of selfie by Nola Johnston

A nature photographer
David Slater takes photographs.
He photographs life in nature.
In 2011, he travelled to Indonesia.
He took photos of monkeys.

Curious monkeys
One monkey watched Slater.
She grabbed his camera.
Then she ran away.
She pressed the shutter
on the camera.
The shutter made a “click” sound.
She liked the sound, so
she clicked it again
and again and again.

Monkey clicks
Every time a shutter clicks,
the camera takes a picture.
Some of the selfies were not clear.
But some were very, very funny.

Selfie is popular
In 2011, the monkey selfie
was on TV, online,
and in the newspaper.
People all over the world
looked at the selfies.
They laughed and laughed.
They sent the selfies to their friends.
One monkey selfie went viral.

Free Picture
Wikimedia put the selfie
in its file of free pictures.
Slater was very angry.
Many times he asked Wikimedia
to take the photo off their site.
Slater says it is his photo.
He believes that artists
must get money for their work.

Wikimedia says no
Wikimedia will not remove
the photo. They say
an animal cannot own a picture
or a piece of art.
A work of art can only
belong to a person.
And the monkey took the picture.
So, Wikimedia says no one
owns the picture.
This means anyone can use it.
And no one pays to use it.

Slater fights back
Slater says the monkey used his camera.
He says he paid to travel to Indonesia.
He set up the camera.
So, the photo belongs to him.
The monkey was his assistant.

Oxford Word of the Year
Every year, the Oxford Dictionary
adds a new word to its book.
People send words to
the Oxford judges.
And the judges vote yes or no.
In 2013, all the judges
said yes for the word “selfie”!

Did you know?
The Oxford Dictionary is over 100 years old.
People say that English is a language
that is living. This means it is always changing.
So, each year, the writers add
another word to the book. The word does not have to be new but it must have been used by thousands of people in a culture.

2. A lexicographer (lek-su-ˈKAW-gru-fer)
is someone who writes or edits a dictionary.

3. A list of computer vocabulary for children gives simple explanations