A new kind of orchard in the city

Adapted from The Province
Level 3

A vacant lot in Vancouver’s Downtown Eastside became an orchard. Ten years ago, the city removed a gas station. That empty lot is now an orchard.

The design of the orchard solved two problems.
1. The city still owns the land. City land is valuable. The downtown area is developing and growing. Therefore, the city may need to sell the property someday.
2. You cannot grow food in the soil. The soil is too contaminated from the old gas station. 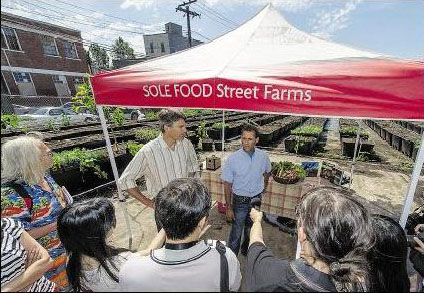 Solefood created a way to farm without using the soil. They are also ready to move if the land is sold. The orchard can be moved.

Each tree is planted in a large black plastic container. A forklift can move the containers. The soil in the containers is not contaminated.

The orchard will produce fruits like apples, pears, plums, and much more. Vegetables and herbs like carrots, broccoli, basil, oregano, and rosemary will also be grown.

The City of Vancouver is proud to be creating new ways to farm in the city. They are setting an example for other cities. The goal is to grow more food, create jobs and use land that is not being used.