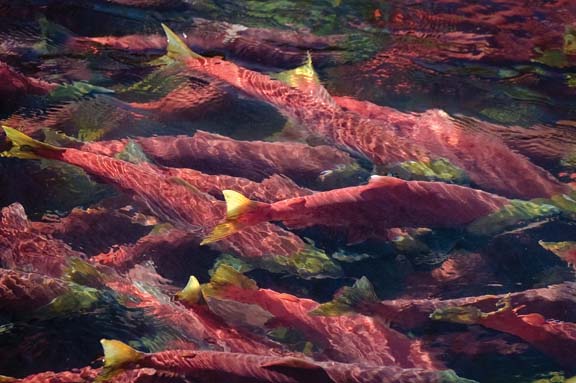 Celebrate the salmon run in October

The salmon run is the time
when salmon return to the rivers and lakes
to spawn (lay eggs).
Salmon swim.
Why do we call it a “run”, you ask?
A run means a route or a journey,
especially on a regular basis.
The biggest salmon runs are every four years (2010, 2014, 2018, etc.).

Most Pacific salmon (chinook, chum, coho, pink and sockeye)
are born in fresh water.
Then they migrate to oceans.
As adults, they live in salt water.

2014  is a big year for the salmon run.
There are many places to watch the sockeye salmon run.
These salmon swim up the Fraser River.
Fisheries and Oceans Canada says about 23 million sockeye
will return to spawn this year.

The best places to spot the salmon run along the Fraser River.
Watch a video and see a map here.

On mobile?
Click here for a map of these six recommended salmon run viewing spots