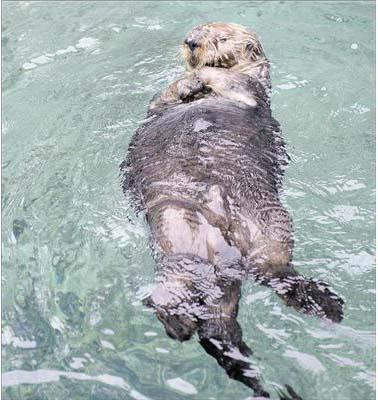 Walter swims on his back at the Vancouver Aquarium.
(Photo: Jenelle Schneider / PNG)

Walter is a sea otter. He was found on the beach near Tofino.

Someone shot Walter with a shotgun in October. He was shot many times.

He almost died. He had broken teeth and a broken flipper.

He was starving. He is blind.

Walter was lucky. He was taken to the Vancouver Aquarium for help.

The aquarium staff cared for him. He spent eleven weeks at the Rescue Centre.

Walter is recovering. He has a pool all to himself.

He is too hurt to live on his own in the wild. He will live his life in the aquarium.

Walter is the fourth sea otter at the aquarium.