Sophie had a money problem

Sophie is a new Canadian. Her husband handled all their banking. He paid the bills. He gave Sophie cash to buy groceries. 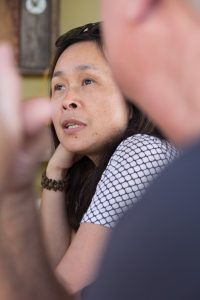 Sophie didn’t know how much money was in the bank. Everything was in her husband’s name.

Sophie worked part-time. She didn’t know how she would pay her bills.

What did Sophie do?

Sophie asked her friends and family what to do. One of her friends works as a “money coach.” She followed advice from her friend.

Sophie had a money problem