The one-dollar Canadian coin, called the loonie, turned 25 in 2012.
To celebrate the birthday, 15,000 silver collector coins were sold.
These coins had two loons on them.
Photo by Nancy Carson

On June 30, 1987, 45 million golden dollar coins
were released in Canadian cities.
These coins had eleven sides.
The new money replaced the $1 paper bills.
People were curious to see them. The coins had a bird on one side.
A picture of Queen Elizabeth was on the reverse side.
The bird is called a loon. People quickly called the coins “loonies”.

Not the first choice
The Royal Canadian Mint wanted to use
a picture of a canoe on the new $1 coin.
This canoe picture was used for years on Canada’s silver dollar.
But the templates for the canoe picture were lost.
They have never been found.
So, the mint used Robert Ralph Carmichael’s design of a loon instead.

The “Loon Dollar Monument”
In 1992, Echo Bay, Ontario put up a giant statue of the loonie.
Echo Bay is the home of artist Carmichael. 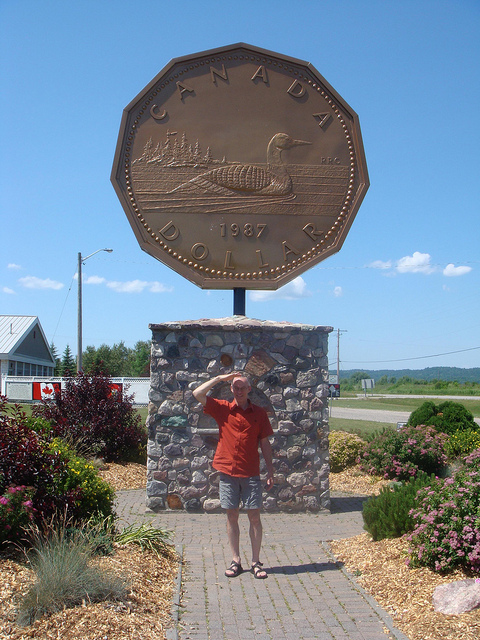 First Canadian on the loonie
Over the years, different images were on the reverse side of the loonie.
The Parliament Buildings and the National War Museum in Ottawa were on the coin.
In 2005, Terry Fox became the first Canadian-born person on the coin.
The 2005 loonie marked 25 years since Fox ran his marathon for cancer research.

The loonie brings good luck
In 2002, Salt Lake City held the Olympic Winter Games.
A Canadian icemaker put a “lucky loonie” in the ice before the gold-medal game.
This was a secret. He did not let anyone see him do it.
Canada and the U.S. were playing in the final games.
Both the women’s team and the men’s team won gold medals for Canada.
This was the first time in 50 years that the Canadian men won.
Since then, the mint makes special “lucky loonie” coins before each Olympic Games.

Changes to the loonie in 2012
In April, the 2012 loonie changed a little. It is now made of brass and steel.
It is now lighter and weighs 6.27 grams.
And there is something new.
Look for a small maple leaf above the bird’s head.

A 25th birthday gift
The mint released 15,000 new silver collector coins for the loonie’s 25th birthday.
This silver coin had two loons on it. You could buy it for $34.95.
Carmichael designed this two-loon image, also.