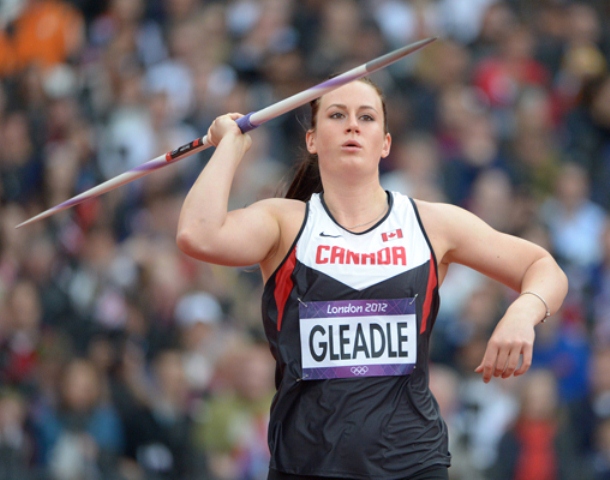 Liz Gleadle finished 12th in women’s javelin at the 2012 London Summer Games.
Photograph by Athletics Canada, for The Vancouver Courier

Adapted from The Courier

New attitude
Nowadays, people notice many girls can throw, too.
And many girls can throw harder and faster than many boys and men.
Jennie Finch can throw a softball close to 143 km per hour.
Jennie was on the U.S. women’s Olympic softball team.
Some girls and boys do not have a good throw.
Why are things different now?

The reason
“Practice makes perfect.”  This is the real reason.
Many boys learned to throw when they were young.
They played catch in the yard.  Some joined a baseball team.
But now more girls are playing softball.
Their coaches teach them to throw.
They practice, practice, practice.
So, “Throw like a girl” is outdated.

Throwing the javelin
Liz Gleadle speaks to young students.
She says they should want to “throw like a girl”.
Liz is very good at throwing.  She throws javelin.
She is the top women’s javelin thrower in Canada.
She threw javelin in the London Summer Games in 2012.

Try everything and be active
Liz, age 23, agrees that practice makes perfect.
She tried many things. She played soccer and baseball.
She tried rock climbing and played the viola.
Liz said she was not great at sports. But she was always active.
This is how she learned about the javelin.

Liz’s attitude
When Liz was a child,
she did not dream about being in the Olympics.
But she started practicing hard at javelin.
Then she started to see results.
“If you work harder than anyone else,
you’re going to be the best,” she says.
Try many things. Find one you like.
Then work hard at it. 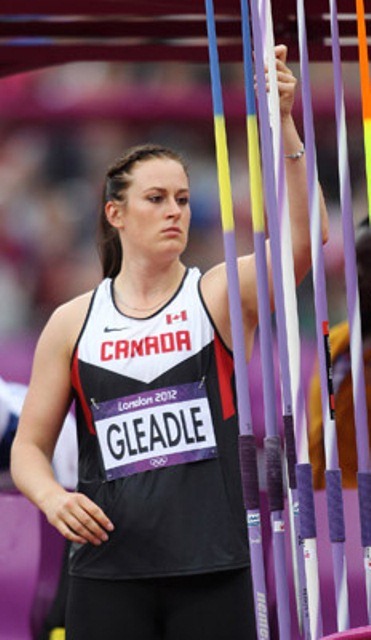 Liz Gleadle finished 12th in women’s javelin at the 2012 London Summer Games.
Photograph by Athletics Canada, for The Vancouver Courier

Eyes on the stars
Liz has two favourite quotes. One is on her iPhone.
The other one is tattooed on the side of her body.
The tattoo says, “Keep your feet on the ground and  your eyes on the stars.”
She wants to win a medal at the 2016 Rio Summer Games.