Two paws in the ocean, and two paws on the land

Wolves that live on islands off the B.C. coast eat mostly fish.
Photo by Guillaume Mazille, Courtesy of raincoast.org

Two paws in the ocean, and two paws on the land
The fish-eating gray wolves of B.C.’s coastal islands

The Heiltsuk* people of Bella Bella
knew something special
about B.C.’s gray wolves.
For 6,000 years the Heiltsuk
have lived in that area.
They have always known
that there is more than one kind
of gray wolf on the coast.
Canadian and Polish researchers
recently used science to prove
the same thing.
* say:  HEL-tsuk

A new wolf study
Dr. Chris Darimont graduated from UVic.
He started to study wolves
14 years ago. He thought
there was only one kind of wolf.
Chester Starr, a Heiltsuk elder,
was helping Darimont.
Starr knew there are two kinds.
For 30 years he has hunted, fished
and watched his wolf neighbours.

What was studied?
Darimont was part of a new study.
For ten years, researchers collected
samples of wolf hair and scat.
They studied these in the laboratory.
Darimont said they picked up
“mountains of feces – 7,000 [samples]”.
Now they know about the wolves’ diets,
and differences in behaviour.
There is now DNA proof of differences.

Timber wolves
Timber wolves live high
in the forests of B.C.
They are big, aggressive, and
compete with grizzly bears,
cougars and other animals
for food and territory.
They hunt moose, deer and beaver.

Island wolves
Wolves of B.C.’s islands
are smaller. They have
a more mellow personality.
They dig for clams, catch salmon,
and eat barnacles off logs.
Island wolves do not have to go far
for food. And they need little energy
to find this type of food.

A third group
Wolves living closer to the mainland
eat 50-per-cent marine and
50-per-cent land animals.
They can easily swim hundreds of metres.
It seems they have “two paws
in the ocean and two paws on land,” says Darimont. 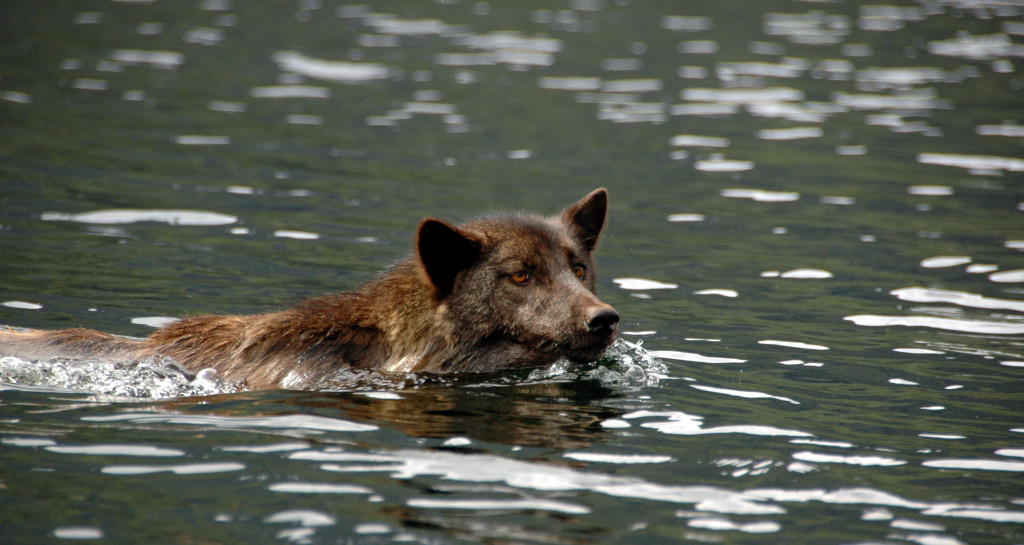 Wolves can easily swim a long way from island to island.
Photo by Chris Darimont, Courtesy of raincoast.org

Amazing wolves
Darimont respects the wolves.
“These are long-lived and
intelligent animals,” he says.
The typical life span is 5 to 7 years.
In captivity wolves can live 12 years.
Wolves have become different
based on their food sources
and the areas where they live.

Ravens and wolves
Ravens and island wolves
have an interesting relationship.
The raven is one of four clan crests
of the Heiltsuk people, as well as
the eagle, wolf and killer whale (orca).
Ravens gather near the wolves
and eat the leftovers from wolf kills.
But the researchers never once found
raven feathers or bones in the wolf scat! 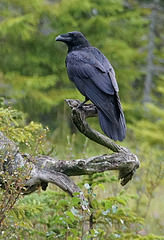 A raven waiting on a branch
Photo by Tim Ellis/CC, Flickr

1.  to cry wolf:  to cry or complain about something
when nothing is really wrong.
Pay no attention; she’s just crying wolf again.
One of these days, no one will listen.

2.  Raincoast Conservation Foundation, the lead funder of the wolf study