Thousands of crows gather in Burnaby 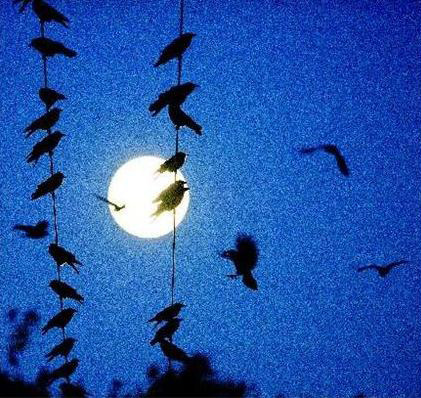 In Burnaby, thousands of crows gather. Watchers say that 3,000 to 5,000 crows gather here every night. They stay for the whole night from sundown to sunrise.

You can see them at Still Creek at the corner of Willlingdon Avenue and Highway 1. They gather here every evening during the fall and winter.

They gather other places in the Fraser Valley too. The places they gather are called ‘roosts’.

Families of crows gather in large groups. A group of crows is called a ‘murder’ of crows.

People are often afraid of crows
They are big. They are black. They are noisy.

We use pictures of crows for death, danger and other bad things.

They protect their young from people and other threats. They fly at the threat in groups. This is called ‘mobbing’.

“They are just being good parents because they see you as a threat,” says Rob Butler. Rob Butler is a retired professor from Simon Fraser University. He lectures about crows.

Crows fascinate people. Crows mate for life. They live in large family groups. Their young help raise their brothers and sisters. They can even make simple tools to help them get food.

Crows are scavengers. They will eat what they can find. Mostly they eat spilled grain, earthworms and other bugs. They also eat garbage.

Some people think crows cause problems
They make messes when they dig for beetles in the lawn and hunt for food in your garbage. They wake people up with their noisy calls at daybreak. Farmers must protect their crops. Crows love blueberries.

Others think crows are beautiful
“I try to explain to people who complain about them that they’re just like us. They’re not a gang they’re a family, raising their children, just like you,” says Derek Mathews, founder of the Avian Research Centre. 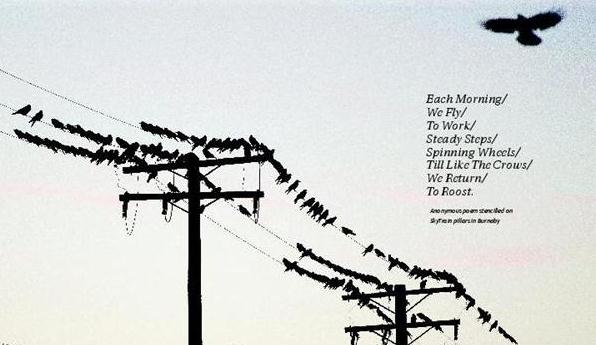 Crows crowd trees, power lines and street lamps before settling down for the night.
Photo: Gerry Kahrmann, PNG, The Province

Someone left this poem on a pillar at the SkyTrain station:

Each morning
We fly
To work
Steady steps
Spinning wheels
Till like the crows
We return
To roost.

Facts about crows
Species:  The crows in BC are a subspecies of a larger crow that lives in North America.
Size:  Adults weight up to 440 grams. They can be 40 centimetres long. Males are larger than females.
Breeding season: from March to July
Incubation:  The female sits on the eggs for about 18 days. The parents are protective. They will attack humans if you come close to the nest.
Life expectancy:  Crows live up to 12 years. The oldest crow we know of lived 30 years.
Diet:  grains, seeds, garbage, dead animals, worms, grubs, mice, fish, mussels and clams. They will steal eggs and babies from other birds.
Predators:  owls, hawks and eagles. Crows will mob or attack these birds when they come into their territory.